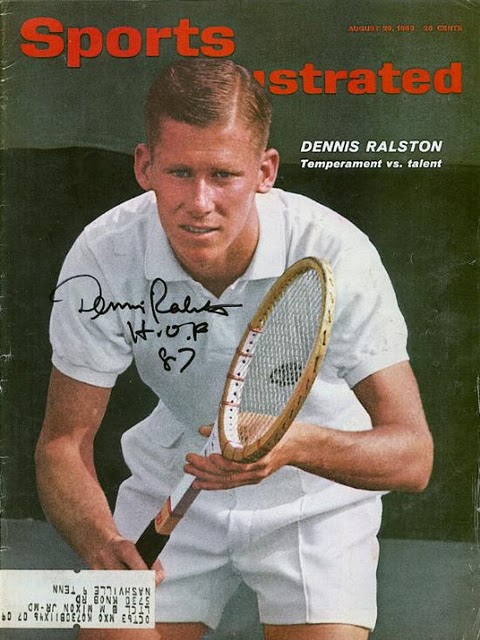 It is hard to imagine a tennis player for whom the moniker “legend” isn’t large enough to encompass the scope of his career. But the span of Dennis Ralston’s life as a multiple Grand Slam Champion, Davis Cup stalwart, acclaimed teaching pro and coach, lower-leg amputee and successfully recovered opioid-addict transcends hitting a fuzzy yellow ball around. It is a saga of greatness achieved at a preciously young age, lost through difficult circumstance, and regained through grit and self- discovery.

In 1960, 17-year-old Dennis Ralston faced a big decision: Should he go to his high school graduation ceremony or play in the adult men’s doubles championship at Wimbledon? Today, he laughs when saying, “At the time, it was a harder decision than you’d think. I had no idea how important that tournament was.” Fortunately for US tennis history, the young Ralston added the $500 he won as a junior Southern California champion to the money raised by his local tennis club and set off for London. After doing well in preliminary tournaments across England, he and 21-year-old partner Rafael Osuna rented a London attic apartment for less than $2 a day. Then, the unseeded duo tore through the draw and stunned the tennis world by emerging victorious as Wimbledon champions.

That was the auspicious beginning of a legacy that includes consecutive NCAA singles and doubles championships at the University of Southern California, five Grand Slam doubles championships, three years atop the US men’s singles ranking, several Davis Cup victories (as a player, captain and coach), and countless other titles and accolades too numerous to list. Doubles partners included Arthur Ashe and Billie Jean King.

After conquering the amateur ranks, Ralston turned pro as one of the “Handsome Eight,” an iconic traveling tour that helped to usher in professional men’s tennis and enabled the sport’s best players to make a living doing what they love. Equally a teacher and competitor, coaching was a natural progression for Dennis Ralston once he was out of the professional ranks. Chris Everett (while #1) and Frenchman Yannick Noah were among his charges. Ralston also helmed the Southern Methodist University men’s team for several years, leading them to a second place finish nationally while winning an NCAA Coach of the Year award. His Davis Cup success–as a player, captain and coach–is unparalleled. Today, he is quick to recall that hearing the “Star Spangle Banner” played at Davis Cup matches sent chills down his spine. But life off the court did not come as easily. Double knee replacements and other operations gone bad were followed by pain, life-threatening infection, leg amputation, heavy opioid use and, over time, misuse. An intervention and a trip to the Betty Ford Clinic helped to bring him back from the brink. All of which for many years he has spoken about openly, while offering support for others struggling with opioid addiction.

Raised in Bakersfield, California, and after a career on the road, Dennis was recruited to Austin by CATA’s own Fernando Velasco (at the time owner and manager of Grey Rock Tennis Club). An Austin physician Dennis came to know who was proficient at fitting his prosthetic leg sealed the move. Today, he serves as pro-emeritus at Grey Rock and is still out there teaching, running drills, and winning coverts.

On today’s tennis, his comments are right to the point: “I love watching Federer because of his movement. And Nadal is a total beast. What Djokovic has done is to combine the two, Federer’s movement with the hitting power of Nadal.” Dennis Ralston once told an audience, “I owe everything to the Bakersfield Racquet Club,” the tennis club where he grew up. Dennis began there as a kid, playing on the men’s singles ladder on its unpretentious courts, competing against players older and better than him. At a tender age, the talented Ralston was taking daily lessons from the great Pancho Gonzales. Speculating, I ask him if Grey Rock, which is also open to the public, is a surrogate, a stand-in for where it all began for him in Bakersfield. Has he come full circle? Is he back to his roots, a legend like Pancho Gonzales hitting with anyone who wants to learn the game? His blue eyes light up. “Yes,” he says.