What is a CTA????  CLICK HERE to get the USTA’s perspective

The greater Austin area is fortunate to have many excellent community tennis associations offering tennis all over the metro area.  This issue, learn about TATA from current president Marcus Reese:

Six community members grew concerned when our Murphy Park courts were in danger of being demolished due to the poor condition of the courts. Forming the “Taylor Area Tennis Association“ we quickly gathered more than 1,000 signatures on a petition to save the city courts.  Under the guidance of USTA Texas, TATA received financial help from Taylor ISD and the City and was able to get all the courts resurfaced. TATA earned an award in 2012 for their efforts.  Read the article here.

2. Tell a little about the programs/events your CTA hosts.

We offer tournaments and mixers for juniors and adults, and offer assistance to those in need in the form of grants and scholarships.

We host two tournaments a year.

The T.I.F tournament held over July 4th weekend which is coming close to its 50th year!

We also have a USTA tournament the third weekend in May.  This is our third year and it’s a great time! We have amazing sponsors who donate BBQ, (Stiles Switch BBQ ), beer (Texas Beer Co ), and a host of others.

Every Tuesday night we have Powerball!  Powerball is where you play a set of doubles with three other people on your court. We play music and it’s BYOB. At the end of the night you count the number of games you won.  A number is drawn between 0-21.  If your number is pulled, you win the pot. If no one wins, the pot rolls over–hence the name “ Powerball “ $7 to enter.

We also host a yearly play day, and plan to do mixers in the near future!

TATA also created the TAP (tennis assistance program) whose mission is to get racquets to students in middle school or high school who can’t afford them. We believe everyone should be able to play, and TATA supports making that happen.

TATA also gives two scholarships away each year to eligible graduating seniors in the area.

3.  Describe a typical member in your CTA.

We have a range of members from those who play tournaments and leagues every weekend. Alternatively, we have players who only come out to Powerball because it’s what their schedule allows.  I think the flexibility helps players find the court time they need.

4.  Who are the principal leaders in your CTA?

5.  What is the best way to contact your CTA?

We also respond quickly to messages sent to us from our Facebook page. Please go like us to stay updated.

6.  What would you like the CATA readers to know about your CTA?

We believe tennis is a great connector in our community.  Besides the obvious benefits of better health, there are social aspects to tennis including being really great for networking. Here at TATA we want to provide tennis opportunities for players of all levels and interest.  Our goal is to promote tennis, and make great relationships doing so.

Round Rock Tennis Association was started in the early 1980s by a group of tennis enthusiasts who wanted to provide social tennis opportunities to tennis-playing adults in the Round Rock area. RRTA has remained true to its mission for more than 35 years. We currently host a number of leagues throughout the week: Monday night Ladies’ Doubles, Tuesday night Men’s Doubles, Wednesday night Mixed Doubles, Thursday night Mixed Doubles, Weekday Ladies’ Doubles, and a Coed Singles Ladder. We play at the twelve tennis courts in Old Settlers Park (near Dell Diamond) and on Thursdays we rent four additional courts from Wilco because the number of players who wish to be involved exceeds the number of courts allocated to us by Round Rock Parks and Rec Department.

We are a nonprofit organization headed by a volunteer board of directors comprised of a President, Vice-President, Secretary, Treasurer plus 9 additional members. We are selected by the membership (currently between 200-300) during voting in the month of October. We can be contacted via email at <info02@rrtennis.com>.

In addition to leagues, we also sponsor a non-USTA sanctioned doubles only tournament in early May for members and friends of RRTA. The cost is minimal and we provide food, drinks, t-shirts, trophies and lots of fun tennis and camaraderie.

There is no “typical” member of RRTA. Each person is an individual who comes from a diverse background, social and economic standing, career and family situation. Our ages range from 20s to 80s. Our tennis playing ability ranges from 2.5 to 5.0. Some of our players play once a week while many others play WTTA and USTA leagues and tournaments.

We are a welcoming group and are always looking to bring new people into our circle. Many nights after playing we sit around and enjoy a beverage and snacks and talk tennis and “life.”

Sign up (for free) to be a substitute player and check us out. Many long-time RRTA members started out as subs and then joined up after a season.

Alan Gnani, newly-elected president of the Austin Tennis Club, has been active on the ATC board for several years.  As a fellow CTA in the Austin area, CATA has a close working relationship with ATC and wanted our readers to know more about the work they do. 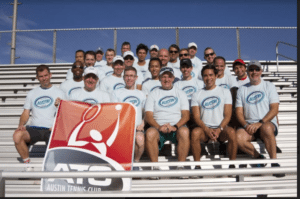 Read Alan’s responses to some questions a CATA staffer had about ATC’s history and focus.

Austin Tennis Club (ATC) started as an Austin area non-profit organization devoted to promoting the competitive and social aspects of tennis amongst the local area LGBT community and its allies.  Membership is open to any adult who endorses ATC’s basic principles.  All tennis players and supporters, from beginners to professionals, are welcome to join the organization and participate in its competitive and social activities.

ATC hosts both competitive and social tennis events throughout the year.  Weekly social doubles is held every Tuesday and Friday night with our partners at Austin Tennis Center and South Austin Tennis Center, respectively.  ATC’s largest annual competitive event is the Heart of Texas Classic tournament, held every Memorial Day weekend.  Over 100 players from all over the country participate in singles and doubles play in beginner to advanced level divisions. ATC also participates in the annual Texas Cup, a competitive tournament that brings together the local LGBT tennis clubs from Austin, Dallas, Houston, and San Antonio in a singles and doubles competition for social camaraderie and tennis bragging rights.  Many ATC members participate in local USTA leagues, USTA tournaments, social play with other members, and national tournaments with the Gay and Lesbian Tennis Alliance (GLTA).  Social events, dinners, and parties are held throughout the year.

A typical ATC member is a member of the LGBT community or a close ally that appreciates the social, health, fun, and competitive aspects of playing tennis.  Our members are tennis addicts, casual participants, league players, tournament junkies, beginners, and veterans.  Above all, I think our members would say that ATC offers new outlets for tennis play and lasting friendships.

ATC participates with and is a member of the international Gay and Lesbian Tennis Alliance (GLTA) that provides social and tournament opportunities around the USA and across the globe.  ATC is also devoted to giving back to the community by raising donations for charities and organizing charitable tennis tournaments and events.

ATC values all of its members that keep our organization active and viable, but we are led by a volunteer group of 8 members that make up the Austin Tennis Club Board of Directors.  Our most recent elections were held in July, 2017, and our new board for 2017-2018 is listed below:

ATC has an active Facebook page, which has our most current announcements and activity updates, and a dedicated club website with membership and general club information.

Messages can also be sent through our Facebook page.