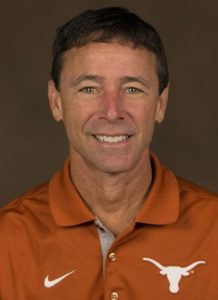 The NCAA men’s tennis championship trophy from last year’s season now rests among the other monuments of Longhorn sports triumphs in the UT Hall of Fame, deep within the north end zone of Darrell K Royal Stadium.

But Bruce Berque is not dwelling on last year’s heroics, even given his team’s come-from-behind victory over Wake Forest and transcending the disruption of the mid-season dismissal of his predecessor Michael Center.

“The buzz [of last year’s championship] still happens, but those moments are becoming
fewer as we approach the new season,” he says. “But, yes, it is still a little bit of a
honeymoon period.” Asked if he slept at all the night of the finals victory, he jokes, “No,
but that was one night I didn’t mind a little insomnia.”

While Coach Berque has said goodbye to five graduating seniors from last year’s
championship team, UT men’s tennis boasts the top-ranked freshman class in the
nation. Already one expert has quipped that the 2019-2020 roster has not been re-
built—it’s been re-loaded. “I tell recruits as often as I can that we’re number one
because I know, at some point, I won’t be able to tell them that.” (Laughs)

Still, he is is cautious in setting expectations: “We have a very exciting group of highly
ranked freshmen coming in, but they are still freshman. They are extremely talented
players but they need to demonstrate they are mature and hungry enough to do a great
job. Thankfully, we have our top two players back [Christian Sigsgaard and Yuya Ito] so
none of the freshmen will have to play number 1 or 2.“

What is Coach Berque’s pitch to potential recruits? “UT checks all of the
boxes—academics, climate, coaches, business, social life, coaches, facilities, you name
it.” He acknowledges that some of the elite junior players in Europe “don’t understand
that US college tennis is a lot stronger than they imagine. So, they can improve a lot at
an elite college program and still play Futures tournaments. The pro circuit is tough.
Unless you win big early and have financial backing, it is very expensive to be out there.”

He looks for players who “love to be on the courts,” as he puts it. “Some of the guys
when they are growing up don’t have the demands on their time that are going to be
placed on them in college, both academically and tennis-wise. So, if they don’t really
love it, it is like anything else—like becoming a doctor—it is going to be really hard to
put the work in.”

As good as life is now for Bruce Berque, his collegiate coaching career has not been
without setback. After building a resume of success at Florida, Ohio State and Illinois,
he became the head coach at the University of Michigan in 2004 and led the team to
nine straight NCAA finals. However, in 2014, he was dismissed (as part of sweeping
turnover of 14 UM coaches). He regrouped and within a year came to UT as a volunteer
coach. “I didn’t know what to do exactly. I was shaken up and I thought about jobs
outside of coaching. Frankly, it was tough emotionally and professionally. But I liked
Austin a lot and I came here and volunteered. I only had to support myself financially,
and I figured I could volunteer for a year.”

His boss, athletic director Chris Del Montel has playfully described Coach Berque as a
“grinder.” He responds, “Most coaches who get to this level are super competitive and
they are all grinding away. There are no short cuts. Hopefully, you recruit players who
are also grinders. My players keep me motivated as much as I keep them motivated.”
He says he hopes last year’s players learned two key lessons from the Michael Center
controversy. “First, to be proud of what they’ve accomplished as part of Texas tennis
history, forever. We had the best team culture I’ve ever been around. Second, take
control of yourself in a difficult situation; don’t allow the situation to take control of
you.”

The 2019-2020 season kicks-off September 16 at a Futures tournament in Houston. Matches with perennial powerhouses Florida, Stanford and USC are on the schedule, and Big 12 rivals TCU and Baylor also had great recruiting classes. Undaunted, Coach Berque asserts: “Definitely, our players want to be challenged. At Texas, we will always welcome playing a really tough schedule. For example, we have Florida early, a team with a lot of players back, and which could easily have won last year’s championship.”

In closing he is asked, “Do you ever reflect on how a kid from Tappan, New Jersey could
end up in Austin, Texas as coach of a NCAA championship team?”
“For sure,” he says. “It’s hard to believe.”