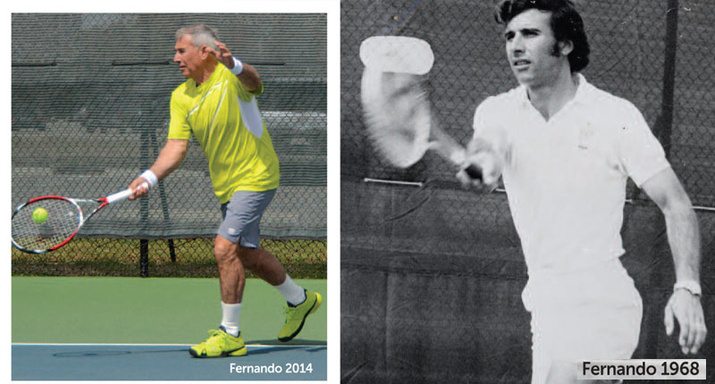 If a life can change in a split-second, for Fernando Velasco such a moment came on a warm October day in 1958.  At a pool in his hometown of Cochabamba, Bolivia, the 15-year-old collided head-on with another boy as he dove from a 3-meter board into the water.  Fernando shattered bones in his neck and back, and the other boy’s injuries were even worse—his left side was paralyzed but later after surgeries, he was able to regain the full use of one of his legs.  And there was more bad news: Fernando’s doctor insisted that his diving and swimming days were over.  Tough news for a teenager who had recently won his nation’s junior diving and swimming championships.

But for the precariously athletic Fernando, a life devoid of competitive sports was a fate he could never accept.  Years later, he would star on collegiate basketball, soccer and gymnastic teams.  (He even returned to swimming.)  But it was tennis that became his passion, his life’s work and his ticket to see the world.

“After my accident, I had to change to something else,” Fernando recalls.  “Tennis became my life.  I played at my father’s club.  First hitting against the wall and, later, I would pay the ball boys and girls to feed me balls.  The more they made me run, the more I paid them.”  At the club, he was also able to watch Davis Cup players from Bolivia, Argentina and Brazil.  “I can do that,” he remembers thinking.

But there were new challenges facing the Velasco family when the notoriously inflationary economy of Bolivia battered his father’s once thriving import-export business.   America, “Land of Opportunity,” beckoned and Fernando won an American Field Scholarship.  Once in the US, he took classes to improve his English and, eventually, the entire family emigrated.

At Eastern Illinois University, Fernando was for three straight years the conference tennis champion in both singles and doubles.  However, as strong as Fernando was competing, it was teaching where he was most exceptional.  “In 1967, I was asked by my coach at Eastern Illinois to help a teaching pro who was giving lessons to kids in a summer program.  I observed how much fun this person was having and the positive response he got from the youngsters.  I decided that day I wanted to become a ‘tennis teacher.’”

To bolster his modest high school teacher’s salary, Fernando was soon giving lessons on public courts.  In 1971, he passed his USPTA test and a half-century career of competition, instruction, entrepreneurship, and administration was launched.  As a tennis competitor, he has been ranked in city, state, and national categories since 1968, holding the #1 ranking in the USPTA, PTR and at the state USTA age-levels of 40 through 75.  Fernando was selected USPTA’s National Pro of the Year in 1978 and PTR named him Male Player of the Year in 2017. USPTA George Bacso Lifetime Achieved award, also received in 2017, is another in his long list of accolades.   He and 9 other tennis professionals have achieved the “Master Professional” status on both USPTA and PTR International categories.

Today, Fernando is the executive director of Austin’s Capital Area Tennis Association.  As a result, he is teaching less and experiencing, once again, that the job of an administrator can be humbling.  “You have to try very hard to make things better and take input constructively.”

Looking back, he says: “My life as a tennis professional turned out better than I could have dreamed.  Not a bad journey for a young man from Cochabamba, Bolivia who arrived in the United States with no money but with lots of faith, family support by his spouse of 52 years, his four children and 11 grandchildren and the desire to succeed.”