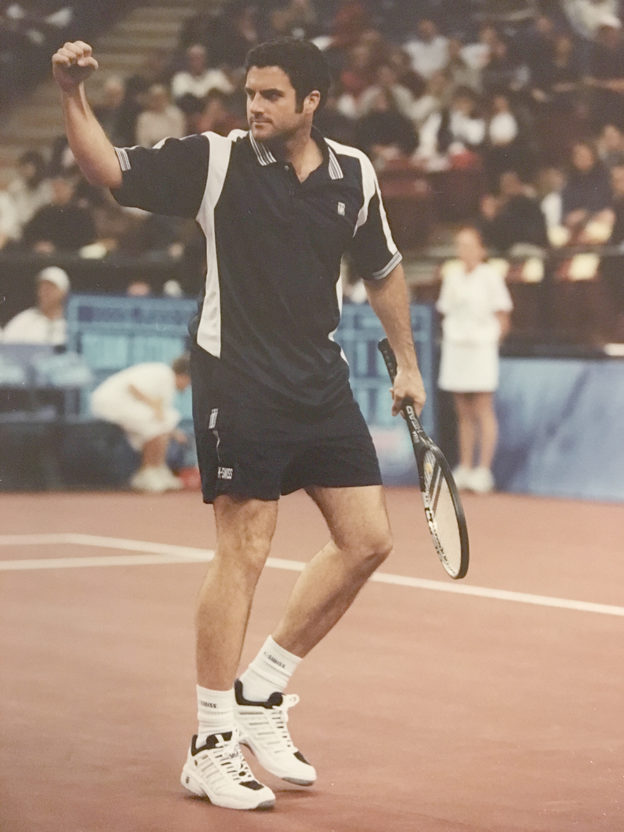 A Tour #1 Reigns in Lakeway Austin’s tennis clubs and public courts feature some of the best teaching pros in Texas and perhaps the nation. But how many of them can boast of wins over Hall of Famers Jim Courier and Andre Agassi? Or, the Bryan Brothers? Not to mention David Ferrer and Fernando Verdasco.

Brian MacPhie can. He’s a former world #1 pro tour doubles player, although you wouldn’t know it by his unassuming nature. He’s a California native, so you might even call him “laidback.” But his tennis resume could be shouted from the rooftops. For starters, he went a perfect 75-0 as a high school player and won the state championship as freshman. “Impressive!” I venture. “Not really,” replies Brian. “At 14, I was already on the US national team, playing juniors tournaments at Wimbledon and Rolland Garros. The only reason I was still on my high school team was to be with my friends and have some fun.”

Instead of turning pro out of high school, Brian played number #1 singles and doubles at the University of Southern California, a perennial tennis powerhouse. He became an All-American. “I wasn’t ready to tour the world as a teenager. It wasn’t until I was beating pros in the top 100 that I turned professional. I’m glad I waited until I was able to compete physically and mentally.”

While still at USC, Brian was invited to an exhibition tournament and was scheduled to play his idol, John McEnroe. But Brian recalls that the legendary lefty “didn’t want to play a ‘no-name’ college player. So I ended up playing Jimmy Connors instead! Funny, a few years later Patrick McEnroe was one of my partners. John and I later became great friends.”

Another of Brian’s notable partners was recent Hall of Fame inductee and Wimbledon singles champ, Goran Ivanisevic. “I found out which hotel he was at in Paris and I left him a message. I didn’t expect to hear back but he calls, ‘Yea, I’ll play with you.’ I couldn’t believe it! We had great success. Goran was the first and last guy on the tour who would serve ahead of me.”

After winning seven titles, Brian left the tour in 2006 and, looking back, he says: “Players were more well rounded then. Doubles was almost exclusively a serve and volley endeavor. Then I remember playing the emerging Spanish guys like Rafa and they’d just stay on the baseline slamming away and not coming up. We were used to hitting five-ten volleys per point.”

After the tour, Brian coached pros like all-time ace leader, Ivo Karlovic. But today he teaches players of all ages and skill-levels at the World of Tennis in Lakeway. His advice for club players is: “If your technique is not good, you’re not going to get better. The mechanics must be right or you’re just doing the same wrong thing over and over. You need consistency. You need to know how to play points. You need to have a strategy and know how to manage a match.”

Of course, hard work helps too. “If you want to get better,” he reminds us, “be prepared to hit a lot of balls.”