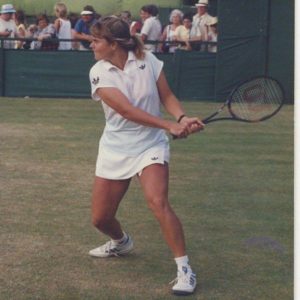 When I met Beverly Bowes, director of tennis at River Place Country Club, she was quick to disarm.  As she introduced me to colleagues and members we passed in the lobby, she quipped, “He’s here to write a ‘has-been’ article about me.”

Fortunately for this column, her “has-been” career on the courts is the stuff of an Austin tennis legend.  Following an elite juniors career, she was a four-time All-American at the University of Texas in singles and doubles, and was twice named Southwest Conference Player of the Year.  She was named to the Southwest Conference 1980s all-decade team.  Upon turning pro, Beverly achieved a top WTA ranking of 42 and played in 25 Grand Slam tournaments.

A fellow pro described her forehand as a “laser beam.”  Bowes joked years ago to a journalist that the aforementioned forehand “bought me my house,” although in retrospect she is quick to emphasize she said that in jest.  In his tribute-video to her induction into the Texas Tennis Hall of Fame, friend, mentor and executive director of the Capital Area Tennis Association, Fernando Velasco, described her as “feisty” and “competitive.”  Clearly, back-in-the-day, she was a hard-hitting battler.  And, from all appearances, still is.

Yet, despite her world class resume and many accolades, during our interview Beverly Bowes downplayed her successes.  “You should title your article ‘0-10,’” she glibly suggests—that being her very atypical record at Wimbledon.   “How many people go 0-10 there?”  (Meanwhile, I’m thinking to myself, how many players even make it to Wimbledon?)

Most notably, she recalls her time traveling and hitting with Chris Evert. “Dennis Ralston (the late Hall of Famer and Evert’s coach) called me to be part of Chris’s team–and I was there!  Chris hit so hard.  It was great to train with her and we had a lot of fun together.”

She glosses over the myriad victories that won her a spot in the Texas Tennis Hall of Fame, so the conversation turns to her top-drawer coaching career at the Key Biscayne US Tennis Association, the Evert Tennis Academy, Southern Methodist University, The University of Texas, Circle C Tennis Club, and, for past 11 years, River Place.  She stressed that under the tutelage of icons like Stan Smith she learned not just how to play tennis, but how to coach it.

So, I asked Beverly, as one of our city’s most prominent pros, about the challenge of teaching mere mortals—club players—how to play the game.  She begins with a refreshing admission: “It is not an easy sport.  To learn it, you have to break things down and communicate it.”

Regarding her current responsibilities at River Place, she simply exalts, “It’s awesome!  I can’t believe I get paid to do this.”

Beverly was born and raised into her early teens in a suburb of Chicago.  But her Lone Star props are impeccable.  Her mom is from Texas.  Her father was the tennis coach at Texas Tech for 10 years.  Her brother played at Texas Tech.  She is in the UT athletics Hall of Honor.

“My dad said ‘pick something and become good at it.’  I played lots of sports but I got lucky in choosing tennis,” she recalls.  “Physically, I was not super athletic, but I was a hard worker.  I loved the strategy behind tennis–how to figure out how to beat someone else.”

After an hour with Beverly, it is clear that she has a lot to teach not only about tennis but about humility.  And how not to take yourself too seriously, no matter how glorious one’s achievements in life.  How refreshing.